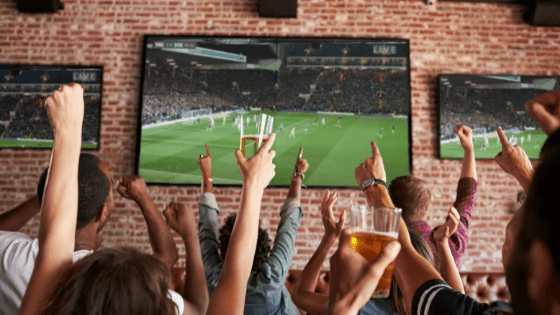 You want to add atmosphere to your bar and attract more sports fans through the doors in order to increase your profit margins but aren’t quite sure what equipment you will need and what you have to do in order to obtain the correct permissions to show sport on TV legally.

Broadcasting live sport can be a great way to increase your profit margins but it does need to be done carefully as it can be a minefield if you get it wrong.

The last thing you want is to spend money on expensive equipment and installation before understanding the regulations. However, you must be aware that you can be fined and even face prosecution if you show events illegally. Therefore, it’s hugely important that you get expert advice on the technology and licences you will need so that you have complete peace of mind that your business is operating within the law.

This blog looks at the steps you need to take to make this a reality and draw a new crowd of sports enthusiasts to your premises.

What technology do I need?

An Integrated Reception Systems (IRS) is a popular choice for pubs and bars who want to show a mix of sports across a range of channels.

IRS collects the broadcast signals from digital terrestrial (Freeview) and satellite transmitters, as well as FM radio and Digital Audio Broadcasts (DAB). The system allows you to deliver multiple signals from an array of antennas.

Installing IRS means that the landlord is free to decide to either connect their existing TV equipment to the system to pick up the existing free-to-air digital satellite or digital terrestrial television, now or in the future. This is a great solution in that you don’t then have to favour one particular supplier of TV programming and the choice can be left to customers.

By installing an IRS system it also avoids the need for multiple dishes and aerials on the building which is not only unsightly, but is difficult to maintain especially as the signal often varies. There are many providers, including ourselves who install IRS and it usually provides:

Related content – What is IRS and where would it be used?

Copyright law is a complicated area requiring landlords to have different licences for sport, TV programmes and films, as well as music.

Showing restricted access television such as Sky Sports in a pub requires a commercial subscription as set out by the rights owner. In such cases the subscription acts as a licence.

Showing Sky programming in licenced premises without a commercial viewing agreement is illegal and those who so so could face criminal prosecution. This could include a substantial fine and costs along with a criminal record. Those involved could also expect civil action for recovery of subscription revenue and legal expenses.

The Federation against Copyright Theft targets pub owners operating illegally and quite often they receive tip offs from competitors, with landlords who pay subscriptions keen to highlight those who don’t.

The same goes for

You do not need to have any particular permission for regulated entertainment on your premises licence if you are simply showing live TV. However, you will need a valid TV licence for the premises to cover any matches shown on terrestrial TV.

This is very important as if you are found to have an unlicensed TV set you can face a fine of up to £1,1000 or even prosecution.  Last year alone, TV Licensing caught over 413,000 individuals and businesses across the UK watching or recording TV programmes illegally.

On top of TV licensing many bars require a PRS (Premium rate service)  or PPL (Phonographic Performance Limited) licence to cover the music played during the coverage and breaks; opening and closing titles, highlights, advertisements – it might surprise you how often music is used.

In addition if you want to show any sports that are not on live TV (such as old football matches perhaps before or after the match) then this would be a licensable activity and you would need permission for films on your premises licence.

Having the correct size of screens is also very important when attracting sports fans to your premises. Even if you have all the correct permissions in place your premises won’t necessarily become the sports bar of choice if the screens are too small and customers can’t watch sporting events in comfort. This would then negate the whole point of investing money to attract sport fans to your bar.

It’s not quite as simple as plug and play when it comes to showing sports programmes in your pub and it could be an expensive mistake to make it found in breach of licences or contracts. You want to be attracting new customers to make sales and profit – not landing yourself with a £1,000 fine instead!

Any initial expenses and time needed to implement the equipment and licences should soon be recouped though when you start to attract a regular new crowd of sports fans to your premises and see the enjoyment people get from supporting their favourite teams.